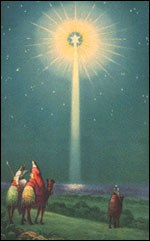 As we enter Advent, it may be worth pausing in our mad seasonal rush to reflect on the significance of Emmanuel, or “God with us,” from Matthew 1:23.

For Christians, this means that God sent His Son in human form, to save mankind from sin and condemnation. Yet we seldom consider the amazing detail that Jesus was Himself fully man from the very beginning, which means that He started His earthly life as an embryo.

Doctor Luke records in his gospel (1:26-45) the joyous announcement by the angel Gabriel that Mary would be with child. Just a few weeks later, Mary visits her cousin, six months pregnant with John, who would become the Baptist. When Mary greets Elizabeth, John could not restrain his excitement, though yet unborn. He leaped in his mother’s womb in the presence of the embryonic Jesus! Nigel Cameron has said it well:

[He] was not merely the tiniest of humans, he was the cosmic creator, the Word by whom the Godhead has spoken into existence the vastness of time and space. And the One who will one day be our Judge.

The incarnation is the ultimate testimony to the value of of all human beings, even those not yet born. At Christmas, this is truly good news.